With tourists flying into space, man walking on the moon, and companies planning to colonize Mars, it is amazing how little we have explored our own planet. The sea is in some ways just as mysterious as those extra-terrestrial places and needs the same kind of collaboration and ingenuity to reach. It is with this attitude that the Coastal and Marine Resources Core Lab (CMR) has constructed its Marine Engineering Team.

“We take care of anything that comes off the boat and goes into the water,” said Andres Espinoza, the lead of the team.

Espinoza is one of five team members whose days end cleaning their hands of grease from machines and salt from the sea. They are constantly tinkering with the many autonomous underwater and surface vehicles (AUSVs), remotely operated vehicles (ROVs), and all other electronics equipment operated by CMR, making sure the vehicles traverse stretches and depths that provide invaluable information about how the Red Sea was formed, how it is changing, and how life in it is adapting.

Nature is a great enemy of electronics. Animals tear away at cords and the sun scorches down on wires, but the sea exasperates all these problems and adds several more. Even its air is more corrosive, deteriorating metal ten times faster than air over land. Along with these extreme conditions, the immense changes in the sea’s environment add difficulty to operating electronics. Some of the equipment sent into the Red Sea need to travel depths of several kilometers, which leaves the instruments passing through large temperature and pressure gradients in which they must reliably function. An AUSV managed by the team.

Another problem is sea life. Biofouling is persistent. Algae and barnacles are always attaching themselves to vehicles, especially near the sea surface where oxygen is richer and light promotes the growth of photosynthetic organisms.

No one is qualified for the job

One might expect working for CMR would require a passion for the sea, but that is hardly the case for the Marine Engineering Team. No sea experience is needed. Neither is any background in marine biology. On the other hand, a mastery of electrical engineering is a must, and so too is a strong willingness to learn.

“No one comes with the whole set of expertise,” said Espinoza.

Anyone joining will certainly add to their competency and credentials. Two of Espinoza’s teammates, Mohammed Aljahdli and Samer Mahmoud, have earned Category B competence for hydrographic surveying based on international standards, which assures their level of expertise. Aljahdli is also finishing his master’s degree based on a project looking to enhance the bandwidth of fiberoptics in order to handle the increasing data demands of CMR experiments. While their engineering backgrounds ensure the team can maintain sensors on the vehicles and instruments will feed data back to the research vessels, the added knowledge gives them the expertise to judge whether the data is valid.

Other work managed by the team includes the maintenance of SeaLABS (Seawater Laboratories for Aquatic Biosystem Simulations) by Hatim Abdulbaqi and the many design and machine fabrications done by Marlo Abala. SeaLABS is designed to simulate the sea environment and is mostly operated by marine biologists, but Abdulbaqi is responsible for its control operations so that water from the Red Sea is constantly circulating through the tanks and that conditions like temperature and light follow the protocols given by the users. He is also essential for collecting data from the sea.

“I have a license to pilot the ROVs. When scientists go to sea, I join them and man the ROVs to collect samples,” he explained. The license was earned through the Fugro Center of Excellence at CMR, one of the four Centers of Excellence at Core Labs. This certification is critical for KAUST research, because people like Abdulbaqi and Aljahdli, who also holds a license, will join scientists sometimes for weeks out at the sea and operate equipment to collect data and samples at different depths and in different environments.

Scientists usually only have one chance to ride a boat to collect data, and any failure can set back experiments weeks or months. CMR’s presence increase the chances of success.

“When you work at the sea, you need to be a multitasker,” said Aljahdli. “You do everything and are prepared for the worst scenarios.” The Team on the CMR research vessel. (from left) Abala, Espinoza, Abdulbaqi and Aljahdli.

One of the advantages of being part of CMR and thus the Core Labs is the easy collaboration with others. Espinoza is heading a project which has brought CMR together with two other Core Labs, the Prototyping and Product Development Core Lab and Laboratory Equipment Maintenance Core Lab, to solve the unique challenges of studying brine pools. Brine pools are found at sea beds and may be the source of the earth’s first lifeforms. Because of their depths, organisms there depend on chemosynthesis, not photosynthesis, giving a different model of life than what we see on land. Furthermore, they emerge from hydrothermal vents, which suggests an abundance of minerals, giving them extraordinary commercial interests.

While deeper waters bring a continuous change in temperature and pressure, brine pools show something closer to a discrete change, making them in some ways the black holes of the sea. The sudden change puts intense demand on instruments that enter them. One example is the salinity content. Salinity affects buoyancy, and the extreme gradient in saline concentration makes it difficult to break the surface of the brine pool. This problem can be solved by adding weight to the instrument, but then it becomes hard to control the instrument in normal water, since the added weight will persistently make it sink.

The three Core Labs together are combining their expertise to solve this problem.

“One solution we are thinking of is adding an appendage like an arm that can extend from the vehicle and break the surface of the brine pool,” said Espinoza.

The brine pool project reflects the overall commitment to innovation by the team, CMR, and Core Labs as a whole.

One of the newest and biggest projects at CMR involves an elite fleet of AUSVs. These AUSVs are part of a collaboration with and leased to CMR by Ocean Aero, a company that produces hardware and software for ocean exploration. The vehicles, the first of which arrived at CMR this past June, are both solar and wind powered and are considered the best available for navigating the Red Sea, giving scientists access to new regions and therefore new data. The Marine Engineering Team is now optimizing the vehicles for its users and gaining valuable experience in their design and operation through the collaboration.

CMR users like KAUST Professor Burton Jones are eager to see what the AUSVs offer above the already excellent services provided.

“The Red Sea is an extreme environment that provides insights on how future oceans might respond to climate change. Also, the processes which occur in the major oceans occur in the Red Sea but within a constrained space that allows us to study these processes in detail close to home. Autonomous platforms of various types are key tools for studying these processes. The CMR team has played an essential role in helping us sustain our fleet of autonomous platforms and finding new innovative vehicles that might further advance our ability to study the marine environment. The CMR engineering group is an integral part of our research team,” he said.

Espinoza explains that users like Prof. Burton can always count on his team’s dedication, because like KAUST faculty they too are motivated by the unknown.

“What excites me most is the exploration. Finding and seeing what’s in the ocean and understanding how it works is my drive” he said. 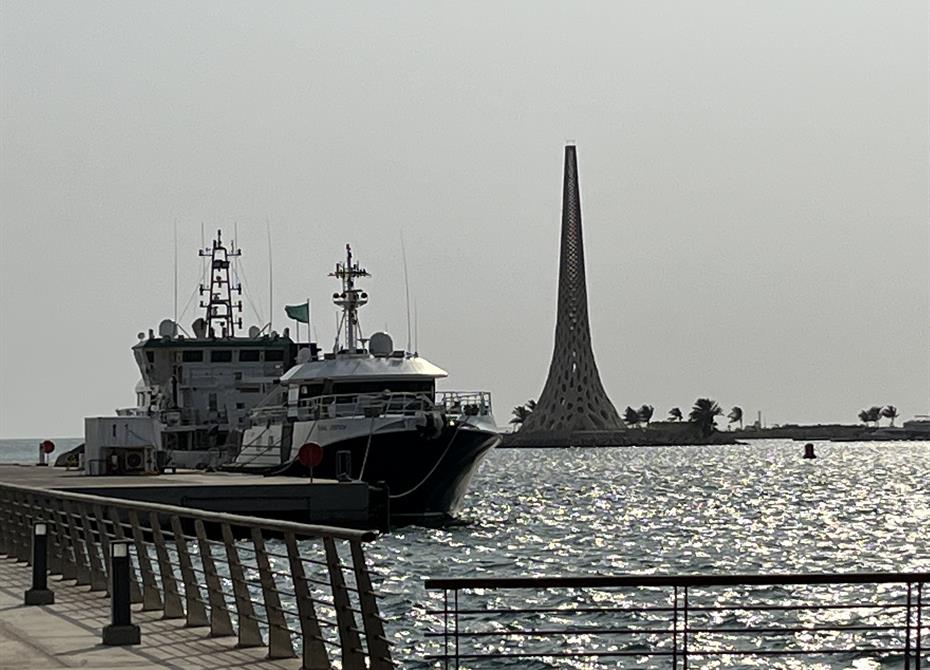 The CMR research vessel by the KAUST beacon.