In the academic world, researchers live by the aphorism “publish or perish”. Good science is defined by publishing findings in good journals, and few exceed the quality of the journal Science. Earlier this month, KAUST Professor Suzana Nunes and her team published a study in Science about a new polymer membrane they synthesized that may significantly lower the energy cost of crude oil fractionation. Notably, of the nine authors of the study, six came from the Imaging and Characterization Core Lab (IAC) and Analytical Chemistry Core Lab (ACL), providing another reminder of how partnering with the KAUST Core Labs raises research impact.

As part of their work to develop more sustainable and environmentally friendly methods to process crude oil, the Nunes lab had synthesized a polytriazole membrane with nanochannels. Because this material had never been synthesized before, prior to testing its capability in hydrocarbon separation, which is critical for crude oil fractionation, they first needed to characterize it in order to understand how the structure of this membrane corresponded to its function.

The IAC played an integral role in this characterization, working in collaboration with the Nunes lab to image the membrane by scanning (SEM) and transmission electron microscopy (TEM) and to chemically analyze the membrane by several modalities of spectroscopy, such as nuclear magnetic resonance (NMR), dynamic nuclear polarization spectroscopy (DNP), and Fourier transform infrared, along with electron paramagnetic resonance.

“It was new material, so we could not check the literature, which is why we had to do a number of techniques,” explained IAC Staff Scientist Dr. Edy Abou-Hamad, one of the authors of the paper.

Some of these experiments simply required the sophisticated instrumentation and advanced expertise provided by the IAC. However, the material that the Nunes lab brought had one feature that made the project unexpectedly challenging. While the instrumentation at the IAC allowed for relatively standard experiments to measure the quantity of carbon and nitrogen in the polytriazole membrane, the quantity of oxygen was another matter.

“Studying the carbon atoms by NMR and nitrogen atoms by DNP was straightforward if using very advanced new techniques.  However, just two groups in the world, one in the United States and one in Europe, are doing oxygen by DNP, because it is very challenging and probes are not commercially available,” noted Abou-Hamad.

Coincidently, he had been working on an “impact project” to develop a new oxygen probe. Core Lab staff are encouraged to pursue impact projects, which are essentially side projects conceived by the staff and intended to drive innovation. The polytriazole membrane project provided the ideal opportunity to test his DNP probe.

“At that [oxygen] level,” Abou-Hamad said, “it’s theoretically impossible, but we wanted to try.” 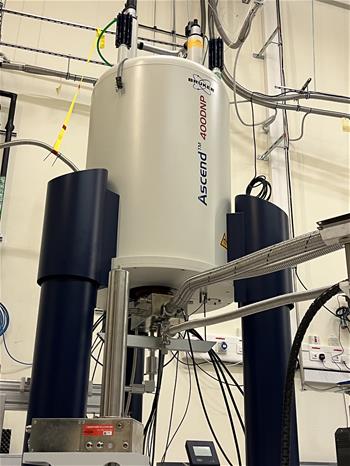 The DNP and new probe (metal cylinder in front) at the IAC.

Dr. Valentina-Elena Musteata, another author of the paper, is still too new to the Core Labs to have her own impact project. But she had already developed a strong familiarity with the Core Labs while working as a research scientist in the Nunes lab before joining the IAC as a staff scientist.

The TEM images she acquired of the nanochannels in the polytriazole membrane gave a new perspective on the separation performance.

“The sample preparation was the key point for the success of the experiment. I had to fix the relatively flexible porous polytriazole within a hard resin matrix in order to cut the 50-100 nanometer thin slices of the membrane cross-sections. This, however, reduced the electron contrast, so I needed to select a staining agent suitable for the chemical structure to view the size of the nanochannels and understand their separation performance", she said.

The images revealed a uniform active separation layer with pores smaller than 1 nm, something rare when using only a single polymer membrane.

Yet, even with this information, the Nunes lab needed more data about its new polytriazole membrane to show the potential industrial impact, which is why the Nunes lab also contacted the ACL.

“I have been working with the Core Labs for many years. I know that the quality of my research goes up when I collaborate with them,” said Dr. Stefan Chisca, the lead author of the study. 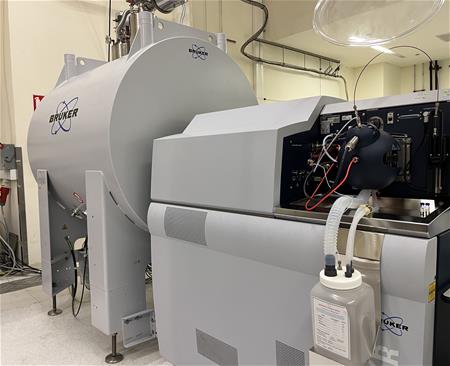 The FT-ICR MS in the ACL

“We wanted to investigate the performance of the membranes and to understand how we can tune the selective layer,” said Chisca.

Mustafa Altunkaya, an inorganic staff scientist at the ACL and another of the paper’s authors, said that the ACL normally will train users to use the instruments themselves, but this project was an exception, “because of the extraordinary gas background effects and the trace level of evolved gas, we had to optimize the thermal analysis protocols.”

And as Abou-Hamad mentioned, because the polytriazole membrane had never been reported before, the ACL needed to work closely with the Nunes lab to interpret the data.

“I had to study what [Chisca] was doing and have many meetings with him for data interpretation and optimization,” said Altunkaya.

Consequently, the ACL was able to show using simultaneous thermal analysis coupled with mass spectroscopy that the polytriazole membrane was robust against extreme heat, which is even more remarkable considering the relatively low cost of the material.

The high robustness of the membrane and high selectivity for hydrocarbons typically found in crude oil left Prof. Suzana Nunes excited about the prospect of changing crude oil fractionation in the future.

“The Core Labs is strong in so many diverse fields. We could characterize our synthetic product with such detail to convincingly show not only that it is useful for crude oil fractionation but why,” she said.

The paper can be read here. 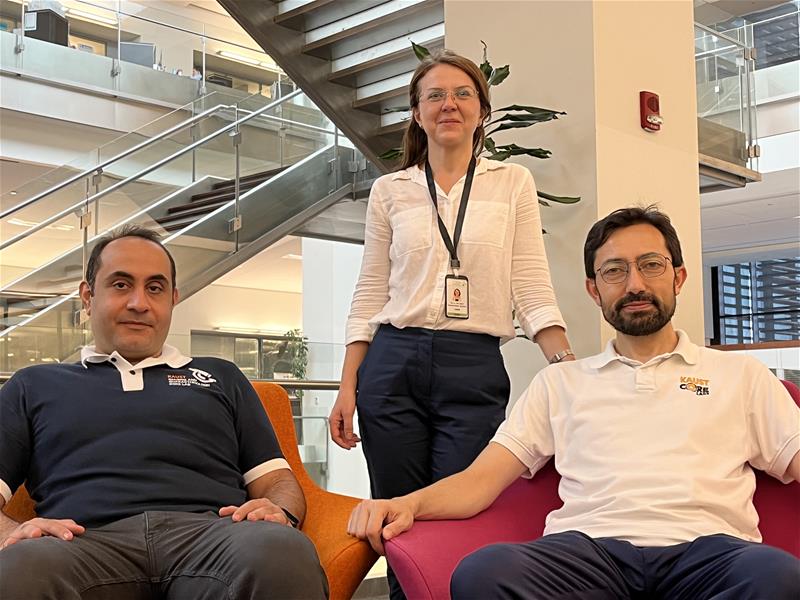