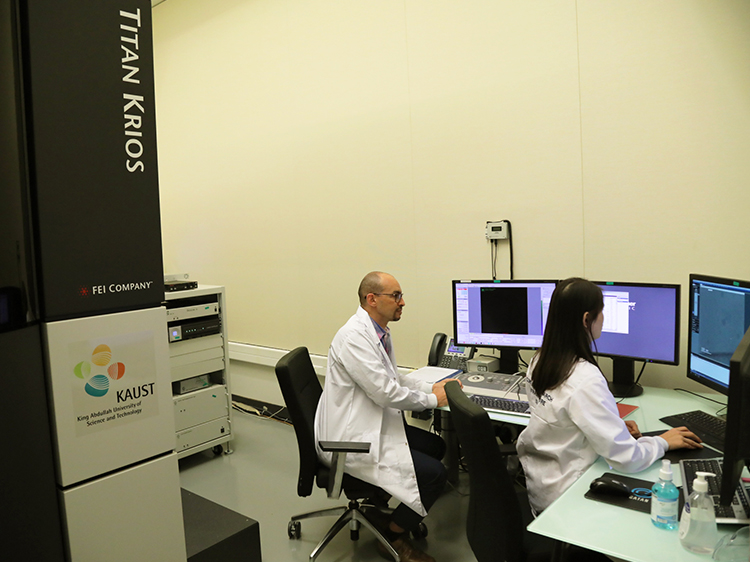 Members of the KAUST Imaging and Characterization Core Lab, including Dr. Lingyun Zhao (right), using one of the six TEM instruments at the Lab

Solar energy is the most abundant and cleanest of all energy sources. However, to capture this energy, solar fuels, which are like batteries that store the sun’s energy, are needed. And much like how batteries rely on catalysts, solar fuels rely on photocatalysts. In a new study seen in Nature Energy, scientists from KAUST, Oxford University, and Imperial College of London report organic nanoparticle photocatalysts with long-lived reactive charges. The KAUST Imaging and Characterization (IAC) Core Lab contributed to the study by characterizing the nanoparticle photocatalysts at high spatial resolution.

Most photocatalysts are inorganic, which limits solar fuels to storing energy at ultraviolet light. Organic photocatalysts, on the other hand, can react at visible light, accessing far more solar energy. The study, led by KAUST Prof. Iain McCulloch, had identified two organic nanoparticle photocatalysts but had a problem.

“They had no direct observations of the nanoparticles that could help them link the structure of the particle and the energy conversion efficiency,” explains Dr. Lingyun Zhao, a staff scientist of the IAC Core Lab and author of the paper. “They could only model them. Using our TEM [transmission electron microscopy] instruments, we could visualize the structures at nanometer resolution.”

The two nanoparticle photocatalysts shared the same polymer donor but different acceptors: one consisting of a fullerene and the other of a non-fullerene. The TEM images revealed this difference led to distinctive structures.

In the former case, the donor formed a shell around the acceptor, while in the latter case, TEM showed randomly arranged semicrystalline domains. These images provided an explanation for why the two nanoparticle photocatalysts show different properties even though they both have long-lasting reactive charges.

Notably, because the nature of these polymers does not allow them to be examined with routine TEM, cryo TEM with advanced sample preparation and low dose imaging was used.

Besides the scientific discovery, Dr. Rachid Sougrat, Director of the IAC Core Lab and also an author of the study, said the project reflects the collaborative nature of the Core Labs, where partners come with a question and Core Lab researchers develop a solution.

“The discussion started on the golf course. A week later, Ian [McCulloch] was in my office with his PhD student, Jan [Kosco] asking how we could visualize their nanoparticles,” he recalled.