Wen Zhang, a scientist at KAUST’s Analytical Chemistry Core Lab, is an expert at studying petroleum-based samples and in identifying their constituents

It is now widely recognized that emissions generated by the widespread use of petroleum as an energy source, especially in transportation, is an environmental problem humankind needs to tackle urgently. However, petroleum is also a source of highly valuable petrochemicals, and crude oil-to-chemicals technology, or C2C, is thought to be the future of the oil industry.

In order to efficiently harness the benefits of petroleum while drastically reducing its environmental burden, scientists have been increasing extraction efficiencies, capturing emissions, and reusing petroleum byproducts and waste. By integrating a Circular Carbon Economy, petroleum research aims to be part of a global solution. And scientists at the Analytical Chemistry Core Lab (ACL) at KAUST are at the forefront of such developments.

By providing customized analytical approaches and chemical analysis expertise to the research community in the Kingdom and globally, ACL has developed advanced capability in characterizing petroleum-based products and supporting general petroleum research and its ecological implications.

To understand the potential applications of a given material, we first need to characterize and identify its components. Petroleum forms by natural geological processes and derives from the remains of different ancient organisms such as plants, algae, and bacteria. This initial natural variability will be reflected in the complex mixture of molecules - hydrocarbons - present in a petroleum sample. Moreover, the combustion products of petroleum-derived fuels will also create a complex mix of other newly formed molecules.

"FT-ICR MS is our flagship technique because it is an excellent instrument for petroleum research, and it has an unprecedented ability to identify large numbers of compounds in complex mixtures with a high degree of accuracy," explained Ma'an Amad, Director of the ACL.

According to Amad, this level of accuracy allows scientists such as Zhang to characterize and elucidate the chemical composition of constituents present in complex crude oils, fuels and in dissolved organic matter at the molecular level. Moreover, it will enable further investigation and optimization of steam cracking conditions (i.e., the necessary conditions to break saturated hydrocarbon molecules into smaller unsaturated hydrocarbon molecules) or the formation mechanisms of soot, a byproduct originated by the incomplete burning of hydrocarbons.

By understanding and improving such mechanisms, it is possible to enhance refinery/combustion efficiency and find new ways of producing and utilizing valuable petrochemicals, which translates to lower economic and environmental costs for companies, and the planet. 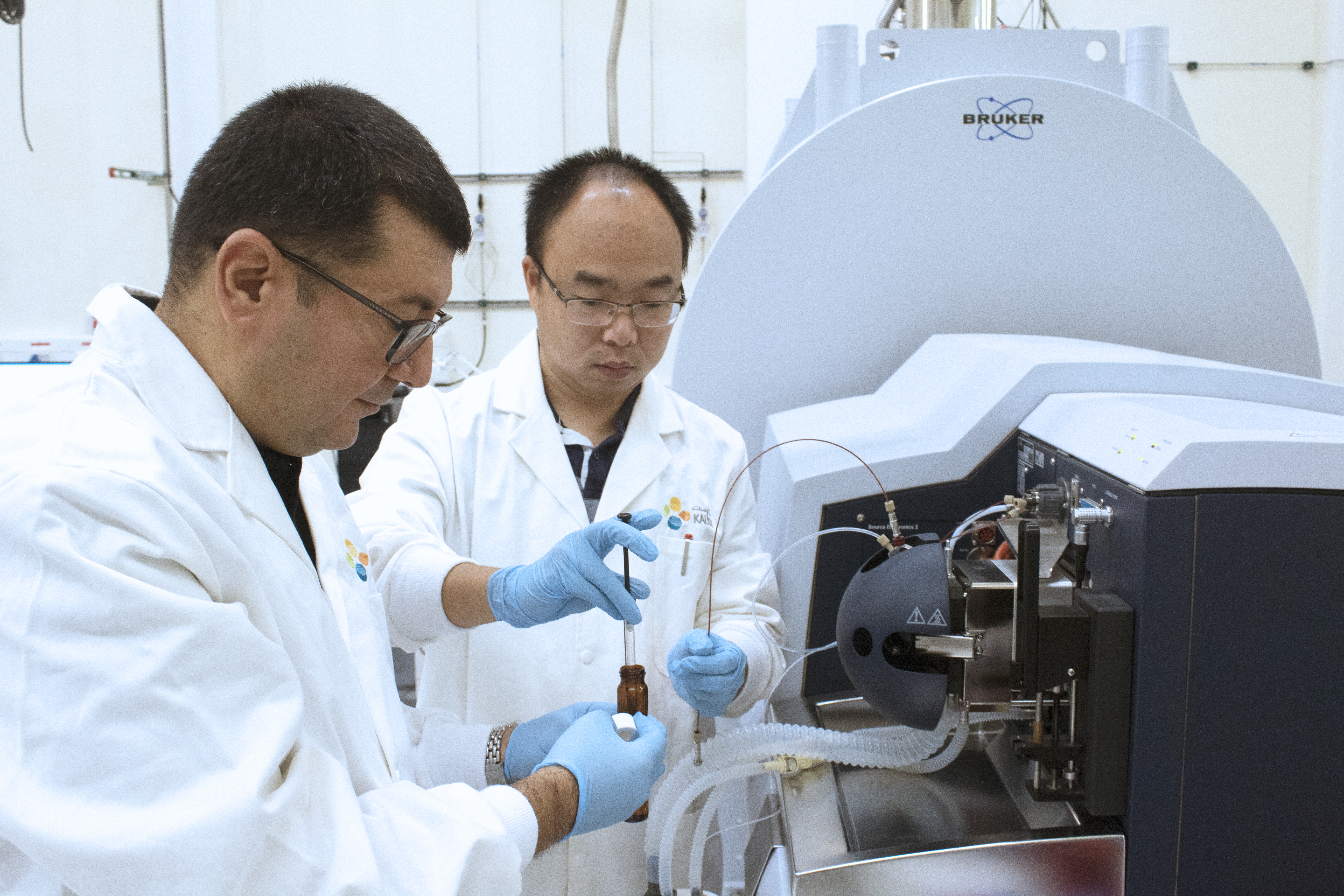 As humanity transitions towards more sustainable and climate-friendly energy sources, the need for petroleum for fuel production is expected to decrease drastically. In contrast, the chemicals market is expected to grow exponentially over the decades to come. This paradigm shift creates an opportunity to explore petroleum as a source of petrochemicals in a responsible and environmentally conscious manner. Therefore, the development of technologies that maximize the production of chemicals from crude oil (at the expenses of fuels) is very important.

This is the belief of Jorge Gascon, Professor of Chemical Engineering and Director of the Catalysis Center at KAUST. By collaborating with ACL and Saudi Aramco, Professor Gascon is disrupting the catalysis field.

With his team, Professor Gascon re-imagined a catalytic reactor that could perform multiple refining steps in a single reactor vessel.  And through his expertise in FT-ICR MS, Zhang supported this innovative approach.

"The support of the Core Labs in the project helped to monitor the compositional and structural changes of oil samples processed under various conditions. Such molecular-level information provides unique feedbacks/criteria on the selection of optimized processing conditions in the newly developed multi-zone reactor" Zhang said.

In summary, the collaboration showed that it is possible to convert nearly half a barrel of Arabian light crude into valuable petrochemicals in a single-step conversion. The new process is also more efficient than traditional techniques, which can only extract 10% of petrochemicals from one barrel of crude, making Professor Gascon's research groundbreaking1.

Another successful collaboration where the FT-ICR MS technique has proven successful was the one Zhang carried with Associate Professor Mani Sarathy and his team from the Clean Combustion Research Center. By applying his FT-ICR MS knowledge, Zhang supported Professor Sarathy's research on the characterization of solid soot particles in flames, pyrolysis oils, and heavy fuel oils2.

Soot particles are waste products created upon incomplete combustion of fuels. They can be mutagenic and carcinogenic when released into the environment. By understanding soot formation and its properties, we can better understand its environmental impact and potential applications. The support from ACL was crucial in this research as the FT-ICR MS was able to accurately determine the mass distribution and chemical formulas of the solid/poorly soluble particles.

"In the case of this research, results from the FT-ICR MS showed the soot contained mostly polycyclic aromatic hydrocarbons (PAHs) and few short aliphatic chains. This support has now enabled new soot characterization (and growth mechanisms) to be determined and offers a more advanced understanding of combustion chemistry mechanisms," concluded Zhang.

These two examples showcase ACL's support towards innovative ways of researching crude oil and its role in a future where environmental consciousness and efficiency are the main drivers of petroleum research. Advanced analytical tools such as FT-ICR MS will soon complement others such as comprehensive 2D Gas Chromatography Time of Flight Mass Spectrometry, increasing ACL's capabilities even further. By combining powerful equipment with highly skilled scientists such as Zhang, the ACL team hopes to empower new disruptive discoveries that will impact Saudi Arabia and the world.