Focusing on the smaller picture 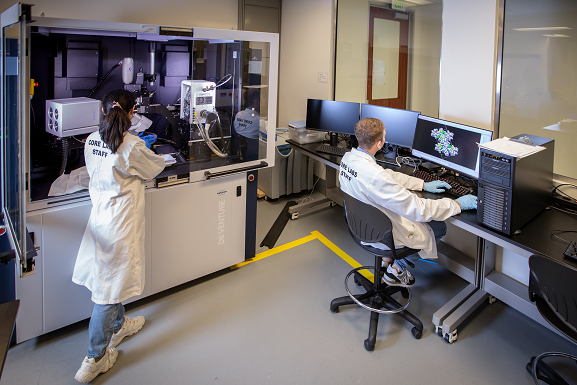 Youyou Yuan (left) centers a sample in the single crystal X-ray diffractometer to determine its molecular structure. Serhii Vasylevskyi reviews the structure of a molecule measured on the same system. Photo by Khulud Muath.

By the Imaging and Characterization Core Lab team and Veronica Tremblay

The Imaging and Characterization Core Lab (IAC) welcomes two new staff scientists, Serhii Vasylevskyi and Youyou Yuan, who bring curiosity and experience with state-of-the-art technologies to IAC’s physical characterization lab. Vasylevskyi and Yuan both joined KAUST with a passion for using chemistry to answer big questions by looking at the small details.


Physical characterization techniques utilized in IAC, like Raman spectroscopy and X-ray diffraction (XRD) of powders, thin films and single crystals, are used to evaluate the properties of materials as small as atoms. These technologies can be applied to determine the purity of medicine or the structure of pores in filtration membranes. 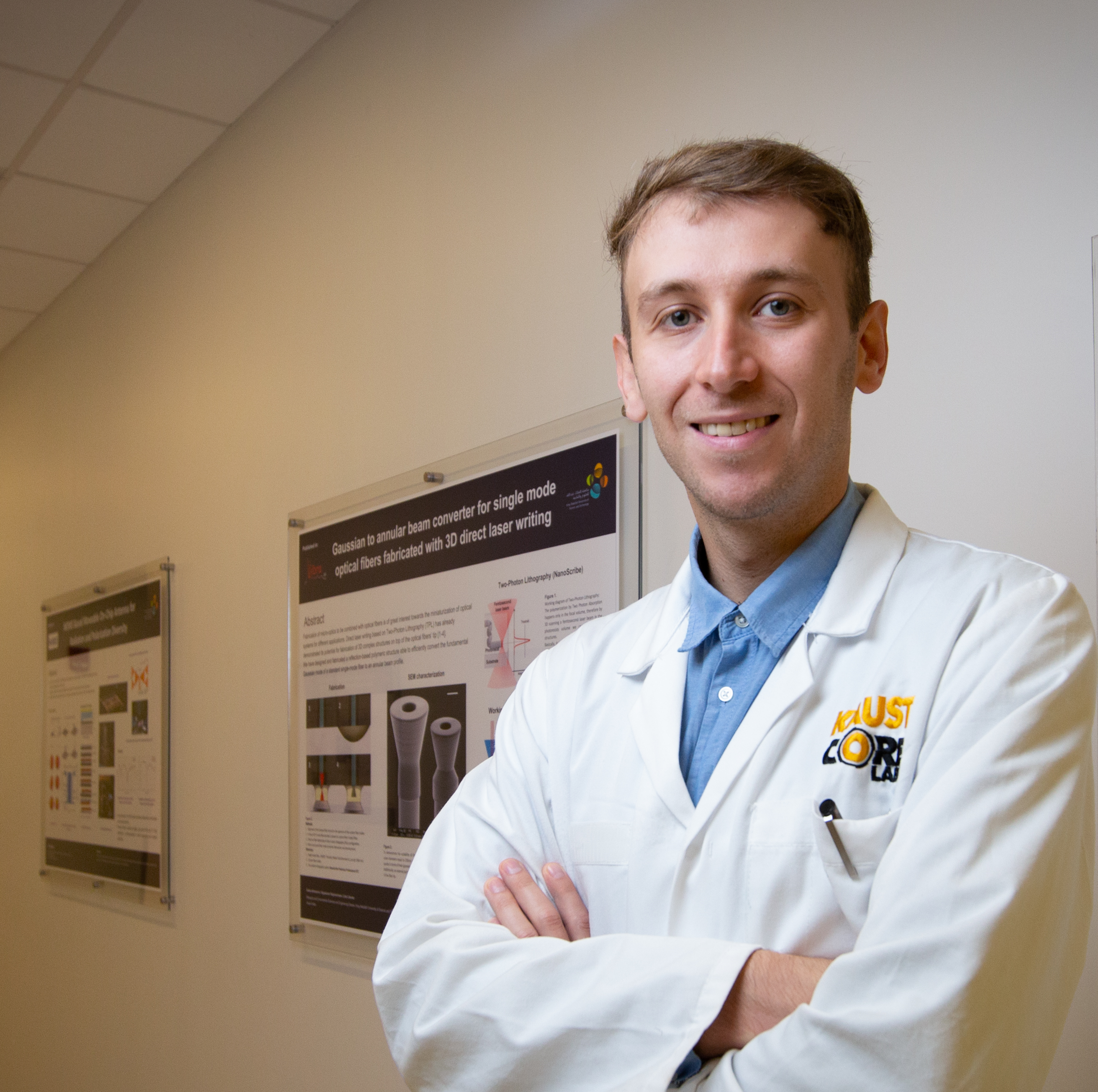 Vasylevskyi, an expert in Raman spectroscopy, is a new hire in the KAUST Imaging and Characterization Core Lab. Photo by Khulud Muath.

Vasylevskyi spent his Ph.D. studies at the University of Fribourg, Switzerland, searching for signs of pesticide contamination in grape products using new luminescent metal-organic frameworks (MOFs). Through Raman spectroscopy and photoluminescence methods, he identified that the fluorescent MOFs lost their glow in the presence of pesticides in products sold to consumers.

Since arriving at KAUST, Vasylevskyi has performed the single crystal XRD characterization of a nontoxic alternative to lead-containing perovskite for use in photoluminescent nanocrystals. Single crystal XRD is especially useful for identifying the active sites of potential catalysts or target interactions for drug molecules. It can also be used to determine weak or strong interactions and crystals structures.

Vasylevskyi is now working on a collaboration to optimize oil filtration membranes using Raman spectroscopy. He creates a model to identify the parts of a molecule that vibrate, find pore defects and explore how to tune materials for a desired application. One surprising result of the study is that the pore defects improve filtration through the membranes. 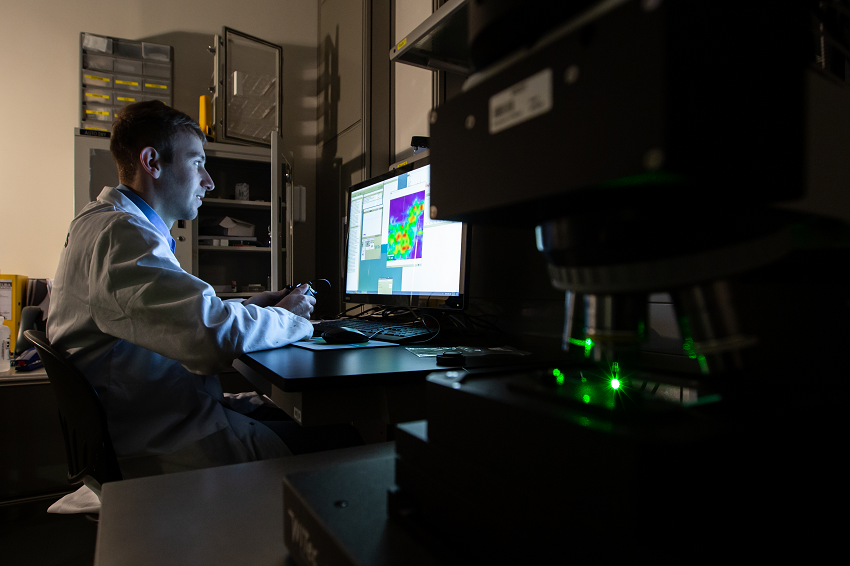 Vasylevskyi maps the structure of a 2D material using Raman spectroscopy. The microscope and green laser that strikes the sample material are shown mid-experiment on the right. Photo by Khulud Muath.

Vasylevskyi has been interested in chemistry as long as he can remember and noted, “I like to know how things happen.” The field of chemistry is “so rich – you can discover something to change people’s lifestyles,” he added.

He is glad he decided that KAUST, as a top research university, was where he wanted to begin his professional journey. Vasylevskyi knows his family will thrive here, and that at the University, he can make his own contributions. 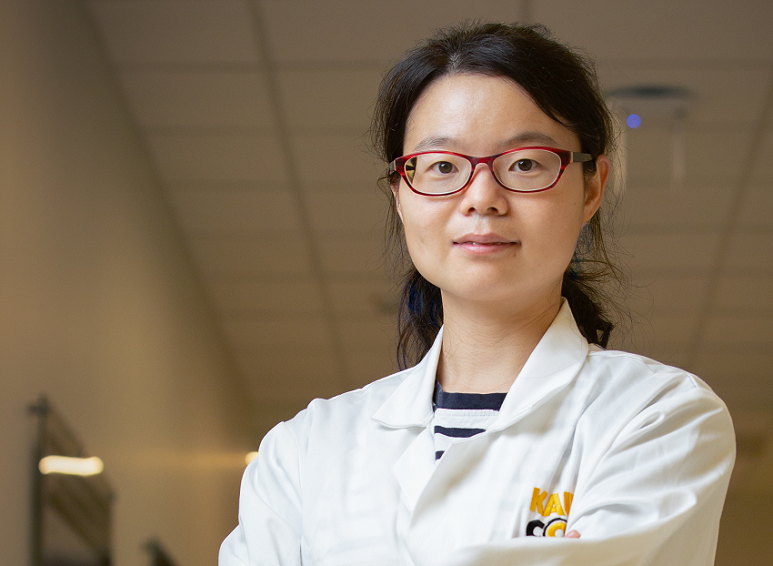 Yuan, an expert in single crystal and powder X-ray diffraction, is a new hire in the KAUST Imaging and Characterization Core Lab. Photo by Khulud Muath.

Yuan began her studies at Peking University in chemical engineering, but she soon found that the materials themselves interested her more than their applications. “If you want to know the mechanism [of how something works], you need to know the details of the materials, meaning their atomic structure,” she said. “[Because of that,] I went from chemical engineering to chemical science.”

During her Ph.D., Yuan worked as the XRD instrument manager in her lab. She gained experience characterizing a novel material using powder XRD signal analysis. As the X-ray of the instrument interacts with electrons from the atoms of a studied crystal, the electrons give off their own X-ray “diffraction,” which researchers can analyze, and every material has a unique diffraction pattern.

In IAC, Yuan has characterized structural changes in the materials inside batteries used in electric bicycles. As the batteries charge and discharge, they deform, and their performance changes. Powder XRD helped to explain the changes and how they influence the lifespan and life cycle of the batteries.

KAUST researchers develop many materials that need to be analyzed in thin film form, such as those for electronic devices. In the physical characterization lab, Yuan started developing standard procedures for performing a technique called grazing incidence wide angle X-ray scattering (GIWAXS), which has not previously been practiced at the University. GIWAXS is used to inform researchers about the direction of crystal growth. This information can be used to evaluate the potential flow of gases like carbon dioxide or nitrogen through a material based on whether its crystals grow stacked or in many directions. 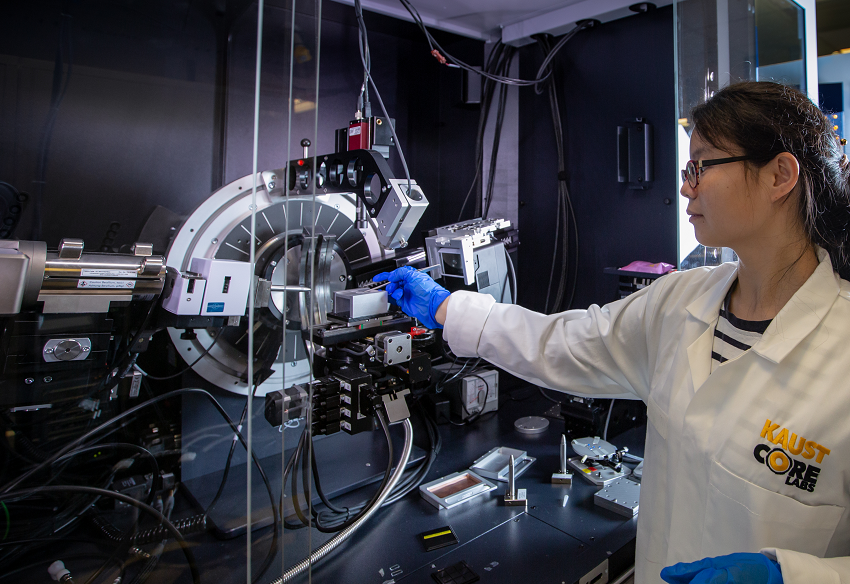 Yuan mounts a thin film sample on the powder X- ray diffractometer, which is used for structural analysis and electrochemical experiments. Photo by Khulud Muath.

Coming to KAUST was an adventure for Yuan, as she never traveled outside of China, but she knew the University was the perfect place to continue learning and developing her skills. During her Ph.D., she worked on her own material in her own field. At the physical characterization lab, she is constantly collaborating with and training users from different fields.

“Every day, I gain more knowledge about many fields, which is one of the reasons I love to work for the Core Labs: to be introduced to new ideas,” Yuan noted. “If they ask questions I don’t know [the answers to], they push me to learn more, think more and always be [involved] in the research.”