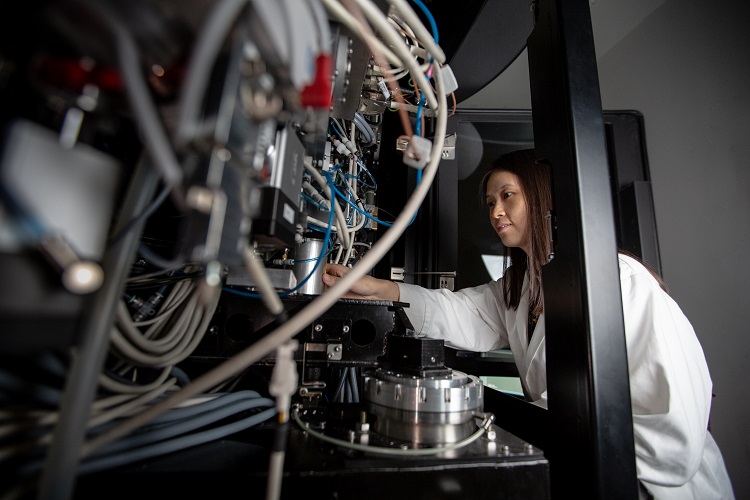 Lingyun Zhao, an expert in cryogenic electron microscopy, is a new hire in the KAUST Imaging and Characterization Core Lab. Photo by Khulud Muath.

Lingyun Zhao, a Chinese-born researcher with a Ph.D. in biology, is one of several ambitious and capable scientists to recently join KAUST’s Imaging and Characterization Core Lab. Her work is part of a new dawn of discovery in the Core Labs in structural biology. With her background in cryogenic electron microscopy (cryo-EM), Zhao brings a wealth of experience and expertise in the use of cutting-edge microscope technologies that are key for macromolecular structure determination without the need for crystallization.

The methods of structural biology and the type of microscopes that Zhao uses are particularly special. She carries out cryo-EM, a technique she perfected during her time at the Beijing Advanced Innovation Center for Structural Biology and during her studies at the School of Life Sciences, Tsinghua University, where she researched the mechanism of Rad51-mediated DNA homologous recombination. While at Tsinghua University, she also researched cryo-EM methodology development to make the technique more mature for wide use in resolving the structures of macromolecules and cellular structures. 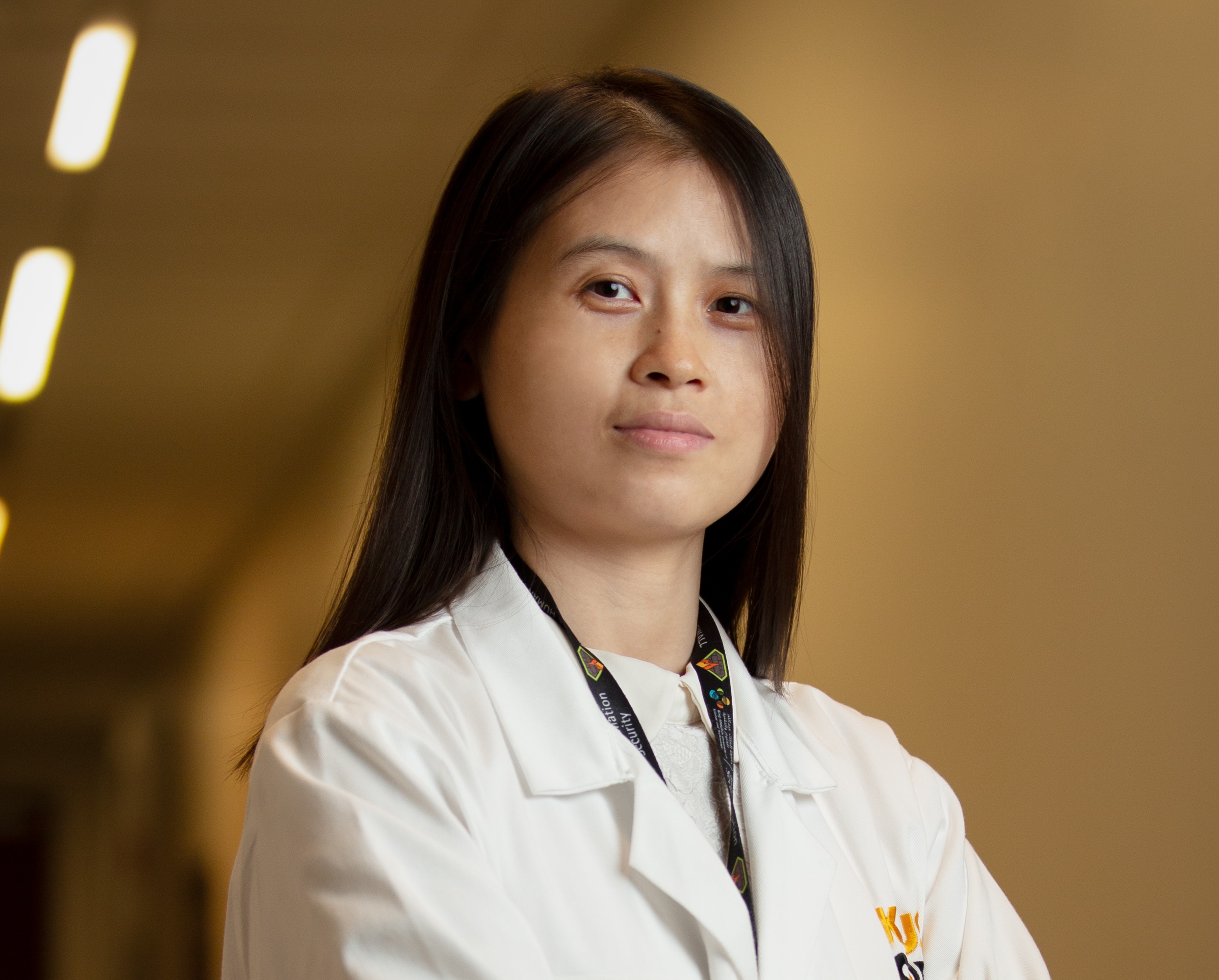 “Electron microscopy is a technique utilized for obtaining the high-resolution structures of biological and non-biological specimens,” Zhao explained. “It is used in biomedical research to investigate the detailed structures of macromolecular complexes. An example is using cryo-EM to identify the structures of homologous recombinase Rad51 and DNA complexes. If we can learn how specific types of DNA repair or replicate, then we can understand how to tackle them.”

The use of an electron microscope to conduct experiments at very low temperatures—cryogenic temperatures are as low as minus 180 degrees Celsius using liquid nitrogen—enables Zhao and her fellow researchers to analyze the structures and functions of protein complexes at the nanoscale. Seeing the structures of proteins at such a level of precision is extraordinary and very exciting for Zhao. 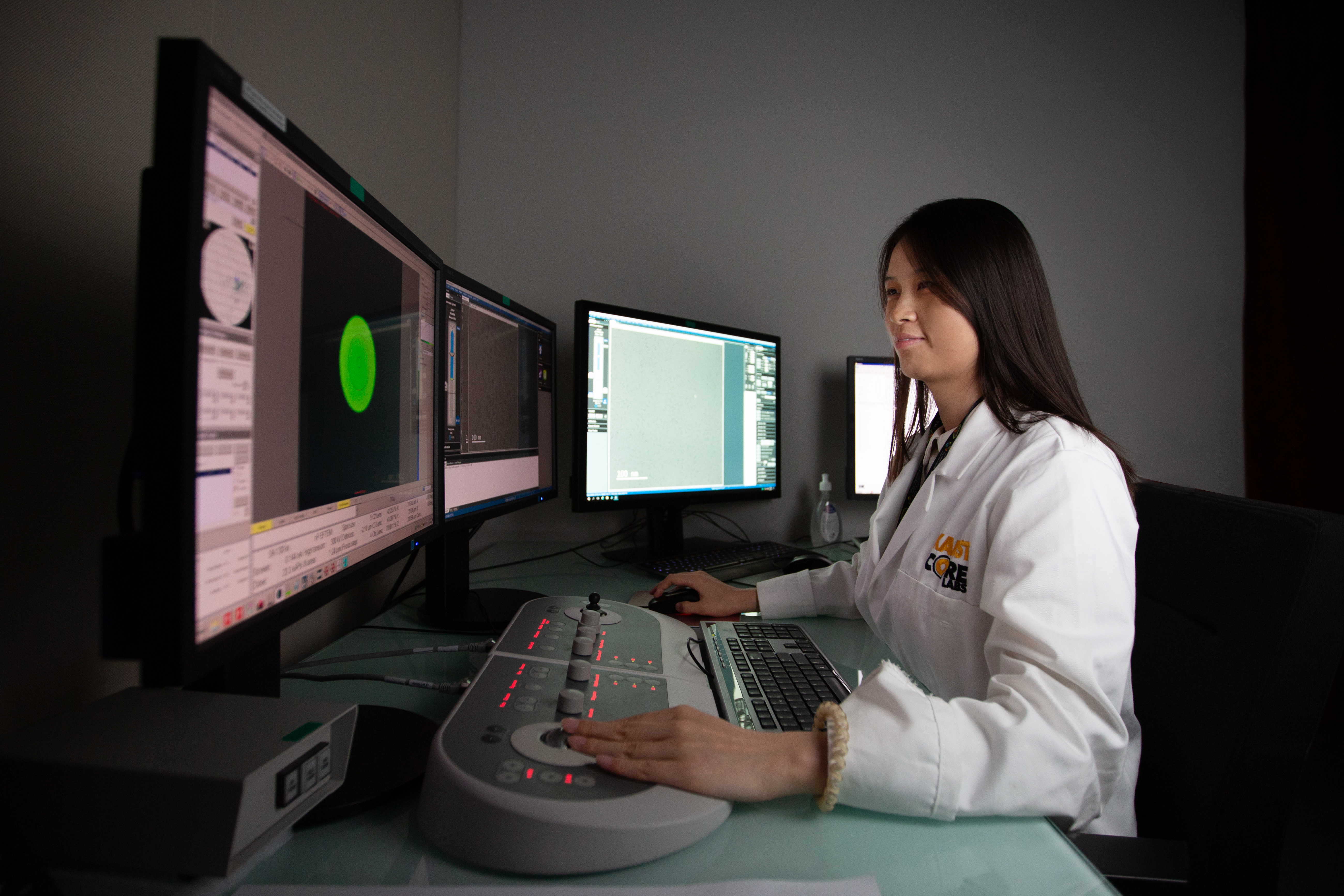 Through her electron microscopy work in the Imaging and Characterization Core Lab, Lingyun Zhao hopes to continue advancing methods at the molecular level to tackle diseases. Photo by Khulud Muath.

“After we have the protein solution, we can prepare the cryogenic samples and collect data to resolve the 3D structures of proteins for analysis,” Zhao noted. “We can reconstruct an actual 3D structure of, for example, the spike protein from SARS-Cov-2 from the collected dataset. Based on the available structures, we can mimic the interaction between the spike protein and its receptor on the cell’s surface, discovering how the protein attacks healthy people and affects them.”

“I chose to join the Core Labs team because I wanted to work with like-minded specialists from around the world, and in the Core Labs, there is a very diverse team,” Zhao said. “Here, I work with imaging experts and those with expertise in other areas. As a team, we can develop new techniques that have the potential to advance humanity’s ability to peer deeper into the macromolecular structures of cells. The more we know at the molecular level, the greater our ability to discover new ways to tackle diseases.”