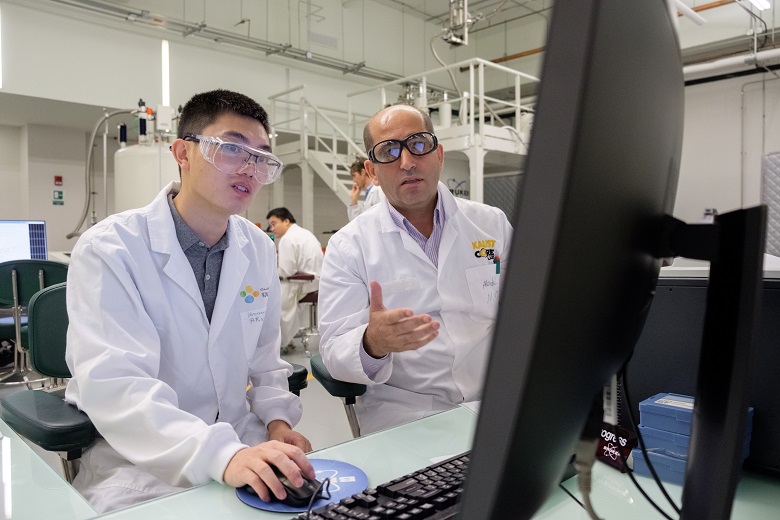 Xylene, an aromatic hydrocarbon, is an important chemical compound that occurs as a combination of three isomers of dimethylbenzene. The isomers are usually derived from the catalytic reforming process of crude oil.

Xylene has many industrial applications, such as: in solvents to dissolve other substances; in the manufacturing of dyes, films and fibers; and in airplane fuel, pesticides, varnishes, paints, lacquers, inks and paint thinners.

Many of xylene’s uses rely on only one of its isomers. The isomers, however, are very similar—differing only in the location of one carbon atom. In industry, scientists usually employ distillation, fractional crystallization and adsorption in high temperature and high pressure environments to separate the isomers, which are individually referred to as para-xylene (p-xylene or PX), meta-xylene (m-xylene or MX) or ortho-xylene (o-xylene or OX).

“The separation of xylene’s isomers takes much energy and is a difficult process due to the isomers’ overlapping physiochemical properties,” said Abdul-Hamid Emwas, staff scientist in nuclear magnetic resonance (NMR) from the KAUST Imaging and Characterization Core Lab (IAC). “These include identical molecular weights, close boiling points and similar structures.”

KAUST Associate Professor Niveen Khashab and her research group teamed up with IAC and an international group of scientists to find a new and less energy-consuming method to separate and purify the isomers for the petrochemical industry. Their work resulted in a paper published as the cover of the journal Chem in May 2020. 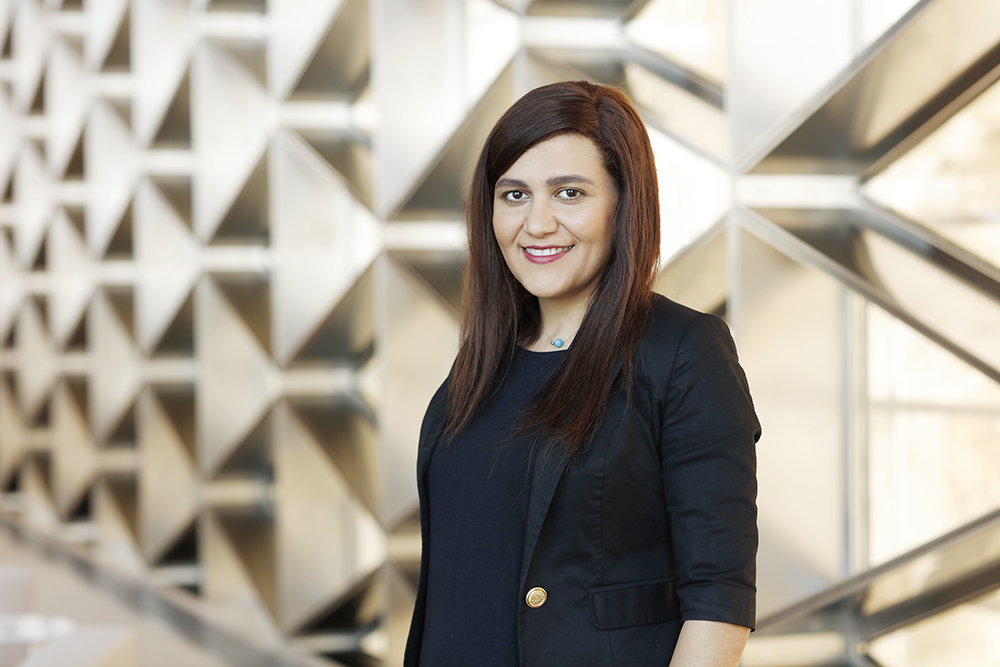 “As reported in the literature, the global energy costs of separating xylene’s isomers using distillation is about 50 gigawatts every year, enough to power roughly 40 million homes,” noted Gengwu Zhang, a postdoctoral fellow from Khashab’s group and the first author of the paper. “Our work focused on reducing energy consumption and improving separation efficiency.”

The research team used cucurbiturils, organic macrocycle molecules, in an aqueous solution to separate the isomers. Cucurbiturils feature a donut shape, with their “hole” or hydrophobic central cavity—a component of macrocyclic compounds—able to hold smaller molecules. Because of the cavity, they are considered by chemists to be molecular containers for a variety of “guests.” Specifically, the researchers used cucurbit[7]uril (or CB7) aqueous solution with 92 percent selectivity for xylene’s ortho-isomer, OX.

“CB7 has strong and distinctive binding affinity with xylene isomers in water,” said Zhang. “Using liquid-liquid extraction, a normal extraction process for separation, we showed that the hole in the middle of CB7 can selectively host OX from xylene’s isomers. We could separate OX with more than 92 percent specificity after one extraction cycle.” 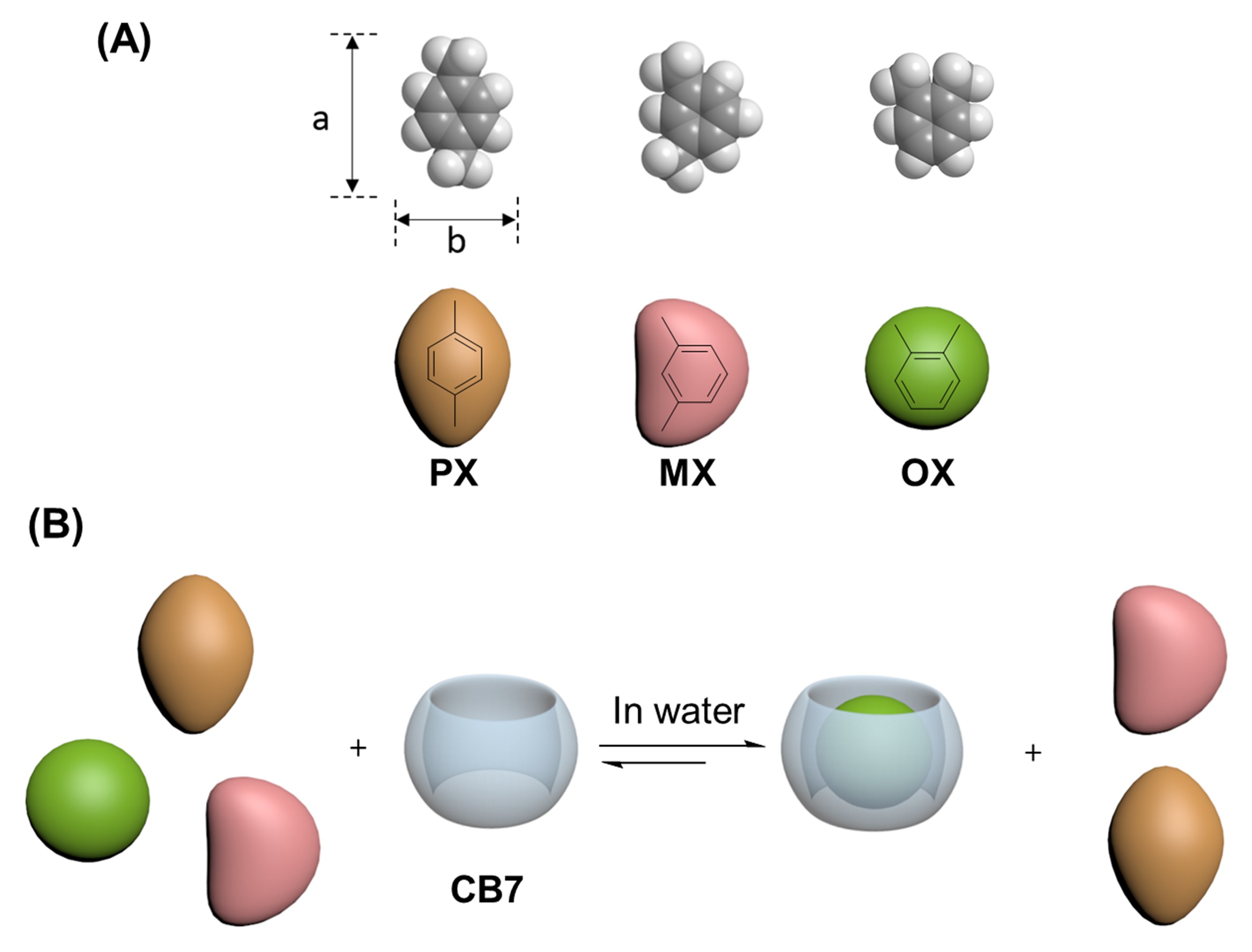 “Importantly, the liquid-liquid extraction process is lower energy and easier to operate than the usual industry procedures for xylene separation,” noted Zhang. “This is because it is carried out at normal room temperature and pressure.”

The IAC team further assisted with the work through the use of IAC’s cutting-edge NMR facilities—including its 950 MHz, 700 MHz and 600 MHz NMR spectrometers. These helped the researchers to record 1D and 2D advanced NMR experiments to confirm the molecular structure of the studied compounds and to identify the separation results for OX. 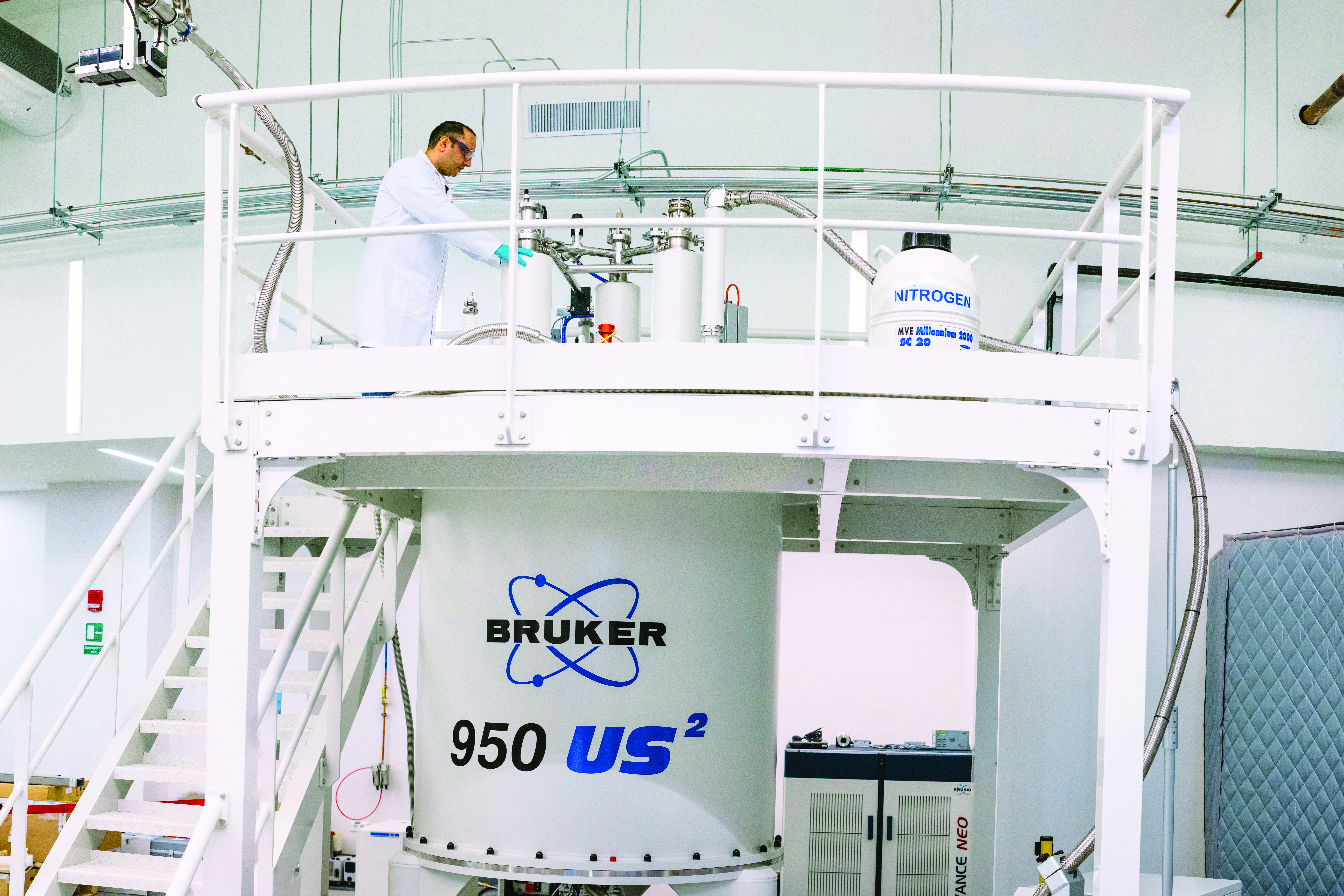 “NMR spectroscopy is a potent and powerful tool for the identification of chemical composition and the determination of molecular structure,” said Emwas. “For example, the features of the NMR spectrum of m-xylene are different and distinguishable from the NMR spectrum of p-xylene, and the o-xylene spectrum is different from the other isomers’ spectra.”

“The high reproducibility and nondestructive nature are the most fundamental advantages of NMR spectroscopy, in which several analyses can be carried out on the same sample,” he continued. “Moreover, NMR is an intrinsically quantitative approach, as the signal intensity produced is directly proportional to the molecular concentrations in a sample composed of several molecules.”

The researchers now hope to take their results to a next level and apply them in petrochemical plants.

“Because the separation process operates in a normal liquid-liquid extraction tower and there is no need for other complicated instruments, it can be easily adopted in existing plants,” Zhang said. 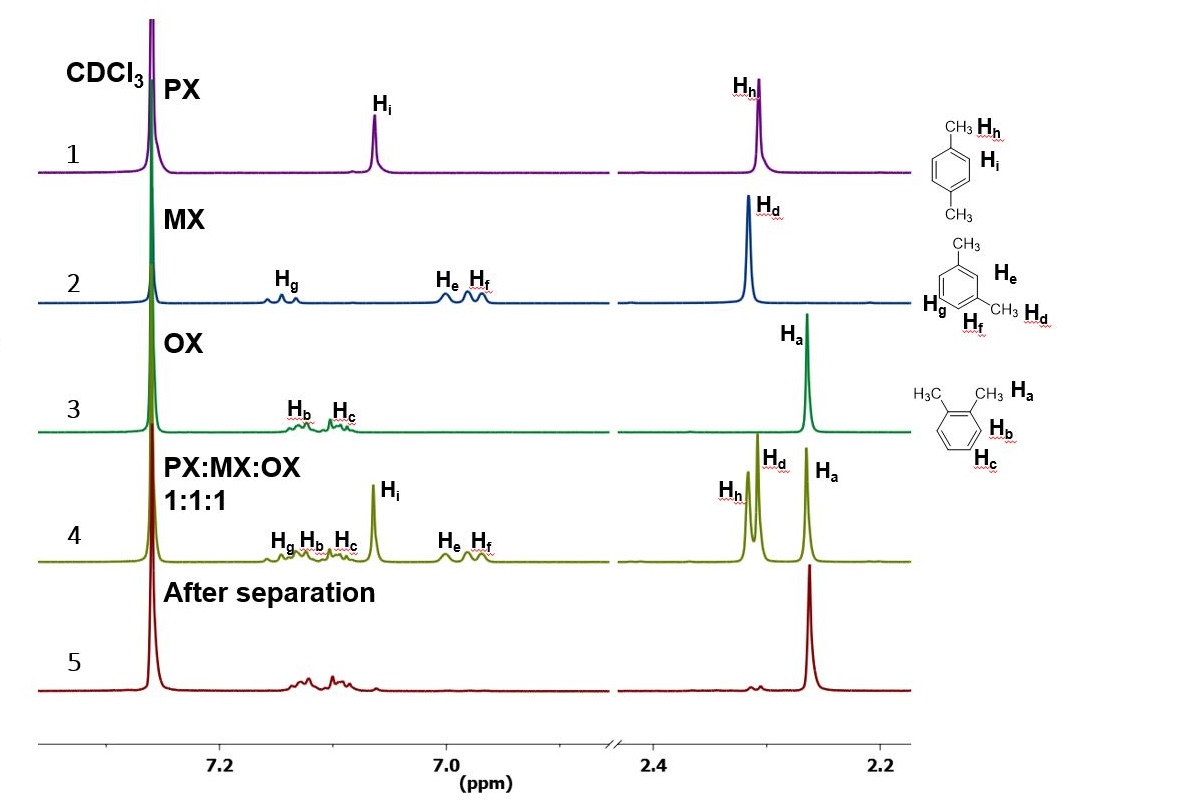 The 1H NMR spectrum of (1) p-xylene, (2) m-xylene, (3) o-xylene, (4) mixture of the three xylene isomers and (5) the end product after the separation process is shown here. The o-xylene was separated almost completely from the other isomers. File image.

“CB7 is also inexpensive, commercially available or easily made and is highly stable compared to other porous materials,” noted Khashab. “Our team has already shown that we can separate xylene from commercial oil samples at scales of up to 0.5 liters.”

“Laboratory scale-up experiments using commercial xylenes and C8 aromatic fraction of pyrolysis gasoline proved that CB7 is able to separate OX with a remarkable selectivity of 83 percent,” the researchers elaborated in their paper. “We believe that [our] work accentuates the role of molecular recognition studies using macrocyclic hosts to improve the quality and energy bill of critical industrial separations.”

“We are also working on applying the separation process for other industrial and medical applications,” added Zhang.