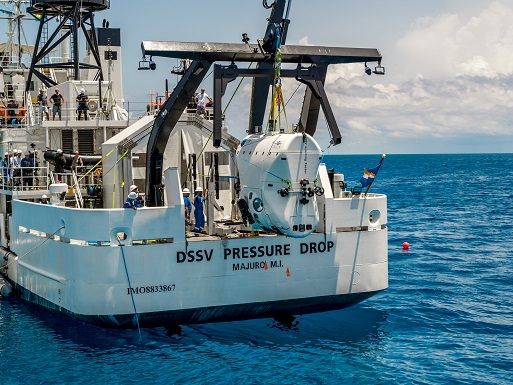 The submersible Limiting Factor—inside its stern-mounted hangar pictured here—is able to journey to any place and depth in the oceans with human occupants inside of it. File photo.

Collaborating for the mission were members of the KAUST Coastal and Marine Resources Core Lab (CMR), University faculty and an expedition team from Caladan Oceanic that was led by renowned adventurer Victor Vescovo.

During the expedition, Caladan Oceanic and KAUST accomplished multiple manned dives in the little-explored Red Sea and—for the first time in history—reached the bottom of the Suakin Trough, its deepest point, in a manned vehicle. They also studied the unique geology of the Suakin’s extinct underwater volcano caldera and dove the shallower but scientifically important Kebrit Deep (Arabic for “sulfur”) located 250 miles north of KAUST. 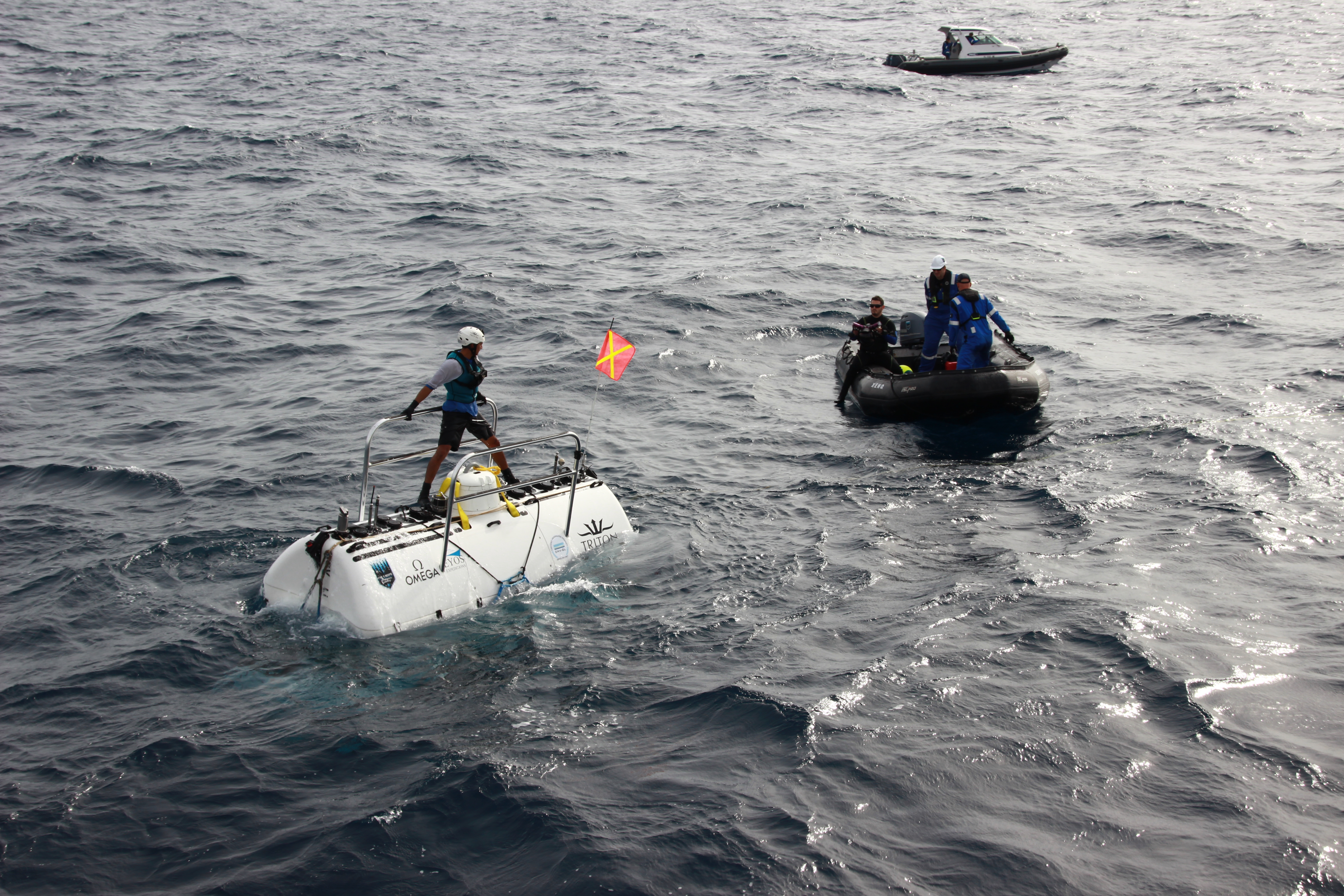 The Deep Submergence Vehicle Limiting Factor is pictured here. It holds two people and can dive to full ocean depth. The swimmer on top removes deployment cables prior to the dive and ensures the submersible is safe to dive before its descent. File photo.

The Suakin Trough and Kebrit Deep exhibit remarkable characteristics—both have "brine lakes" on the sea floor that are significantly different in character than the seawater above them.

Averaging about 10 meters in depth, the ultra-dense pools settle in the centers of the Deeps and create distinct underwater "shorelines" between the highly saline brine and regular sea water on top. The team also observed mineral- and sponge-encrusted "chimneys" dotting the “shorelines” of the Kebrit Deep, although none of these appeared active.

The Red Sea, with a maximum depth just short of 3,000 meters, might be considered shallow, but its high temperature contributes its own dimension to expedition Chief Scientist Alan Jamieson’s work, and he is fascinated by its brine pools.

“One of the things we are looking at [is] what environmental drivers control bathymetric zonation of species,” he said. “The maximum and minimum depth of a species is likely an interplay of pressure, food, substrate and temperature, among others.  The more of the variables we can measure, the better, and the Red Sea certainly fits the bill for high temperature contextualization.”

“The hypersaline pools are obviously horrendous for life, but even when we traveled far away from them, there was still very little going on,” Jamieson continued. “Of all the baited camera work we did, we only saw two species—the big eye houndshark and some prawns. Having only one species of fish is weird, but that one being a shark is even weirder, as there seems very little down the food chain to sustain what appears to be a highly active and abundant population.” 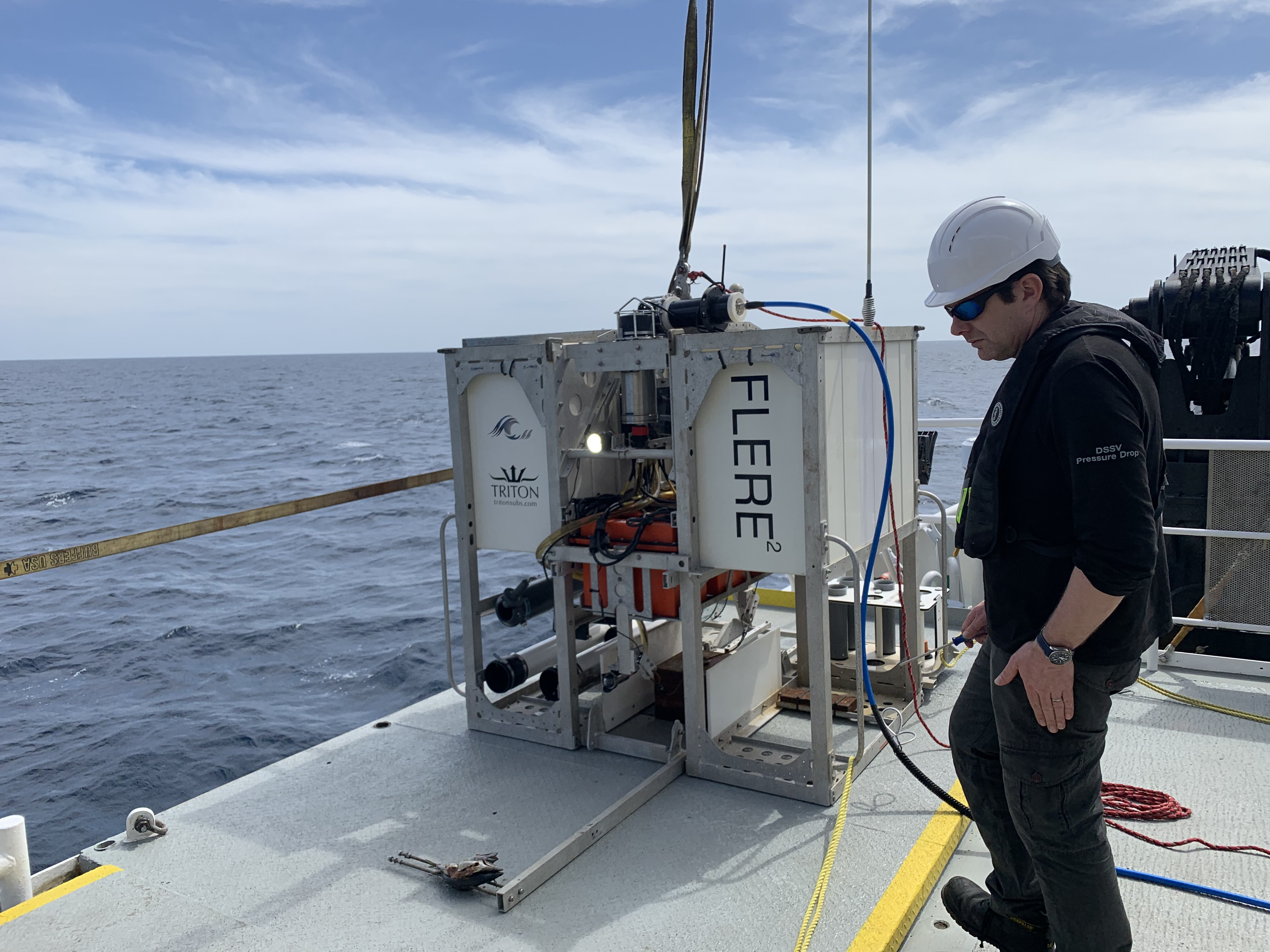 Expedition Chief Scientist Alan Jamieson is fascinated by the Red Sea and its brine pools. He is pictured here during the recent mission standing by one of the scientific landers that accompany the submersible to the sea floor. File photo.

The interface between normal seawater and the “brine lakes” where extremophile microorganisms live is of particular interest to Daniele Daffonchio, KAUST professor of bioscience. Daffonchio joined the expedition following a shore call at KAUST to see the data returned from the manned dives.

“For the first time in the Red Sea, water samples could be visually collected at such depths—more than 2,700 meters,” he noted. “The data that we may obtain after processing those samples could be of great interest for the studies we are performing and preparing for publication.”

Up till now, Daffonchio has based much of his previous work on extremophiles using Conductivity, Temperature and Depth instrumentation data.

“It was also very exciting and instructive to learn the complex operations that may allow us to deploy a submarine close to the brine pools and getting back video records of such extreme lakes at the bottom of the Red Sea,” he added. 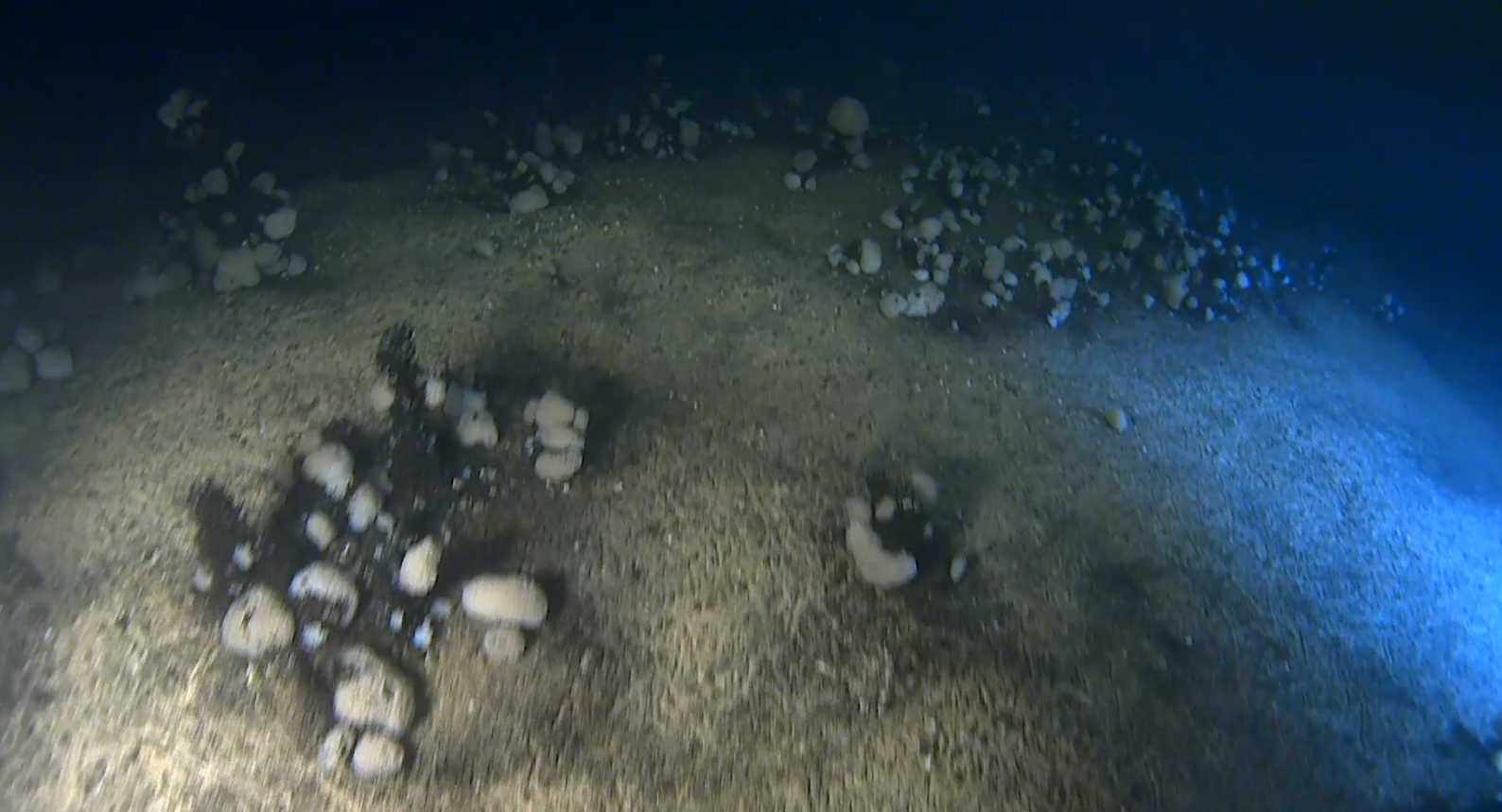 The Kebrit Deep, located 250 miles north of KAUST, features a brine pool (on the right) with sponges on extinct hydrothermal vents by the pool. File photo.

“Geologically, one important question in the Red Sea is to locate hydrothermal vent fields (so-called black smokers) and understand how and where they are formed,” said Froukje M. van der Zwan, KAUST assistant professor of Earth science and engineering. “Hydrothermal vent fields can be important metal deposits and form habitats for unique biological chemosynthetic communities. From Kebrit Deep, a few extinct black smokers have been reported, but the size and extent of the hydrothermal vent field so far was completely unclear. We also did not know much about the relationship of the vent field with the surrounding geology or if there is currently any ongoing active venting.”

“With the new high resolution bathymetry of the sea floor and the visual and video observations made from the submarine, we can now start to make some preliminary quantifications of the black smoker field and its relation to the overall geology (e.g., faults) and the brine pool in Kebrit Deep,” she continued.

“Observations of the rocks and sediments of the Kebrit Deep and the bathymetric mapping will increase our knowledge of the overall geology of the Red Sea and will be integrated into other upcoming research projects at KAUST.” 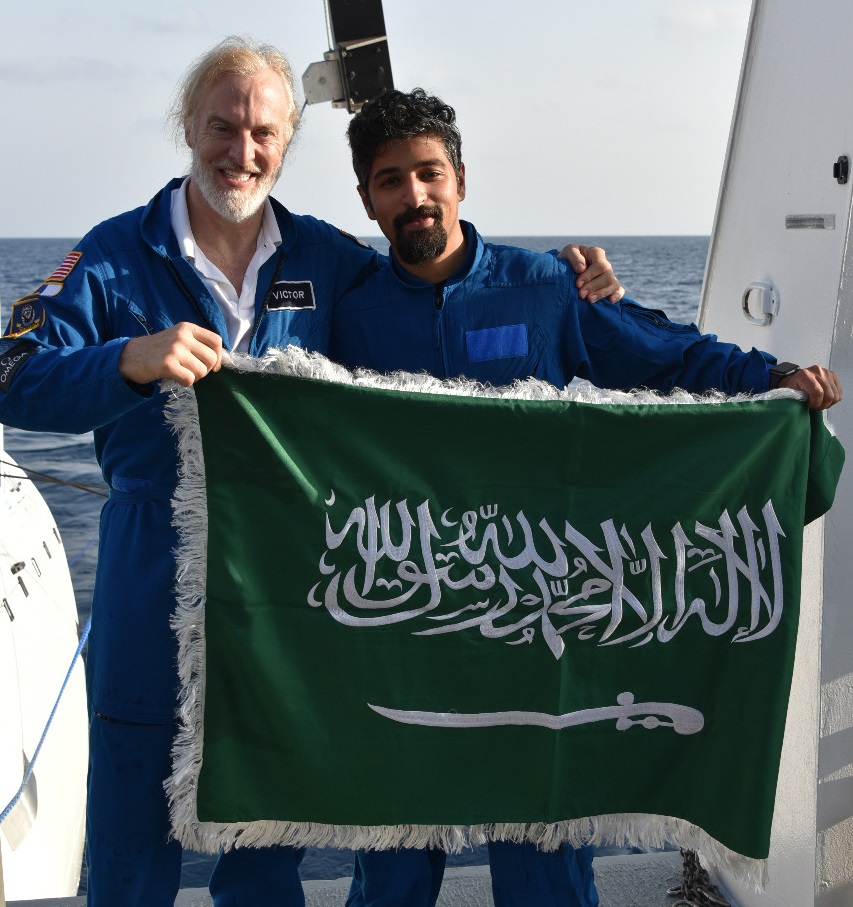 A fruitful collaboration for the Kingdom

Mohammed A. Aljahdahli, a young Saudi engineer and member of CMR, accompanied Vescovo on the first descent to the bottom of the Suakin Trough, the deepest known point of the Red Sea.

“The brine surface was fascinating,” he said, recalling the dive. “It was very obvious as a milky pool at the base of a clear shoreline.”

During the DSV’s almost six hours at the bottom of the Red Sea, it had to fight strong and unexpected currents to avoid being pushed onto steep cliff faces at the sides of the deep. Despite this, Aljahdahli had time to note the stillness that settled over the DSV as it explored the sea bottom.

“Except for using the thrusters to navigate, I was amazed at just how silent everything was as we looked out on the sea floor,” he stated. “It is something I will never forget.”

“It was wonderful to join a young Saudi Arabian national to the bottom of the Red Sea in a manned submersible—for the first time in history,” Vescovo said. “We also believe this will make [Aljahdahli] the deepest-diving Saudi of all time.”

“We are so excited about the collaboration between Caladan Oceanic and KAUST, and [we are] even more proud that our very own Mohammed Aljahdahli is the first Saudi to reach the deepest point in the Red Sea,” said Justin Mynar, executive director of the KAUST Core Labs & Research Infrastructure.

The Red Sea is virtually unexplored and is a major research priority for KAUST, he added.

“In order to protect this important resource, we need to understand it, and partnering with Victor Vescovo has given us the opportunity to observe and sample the deepest and most inaccessible regions like never before,” Mynar said.