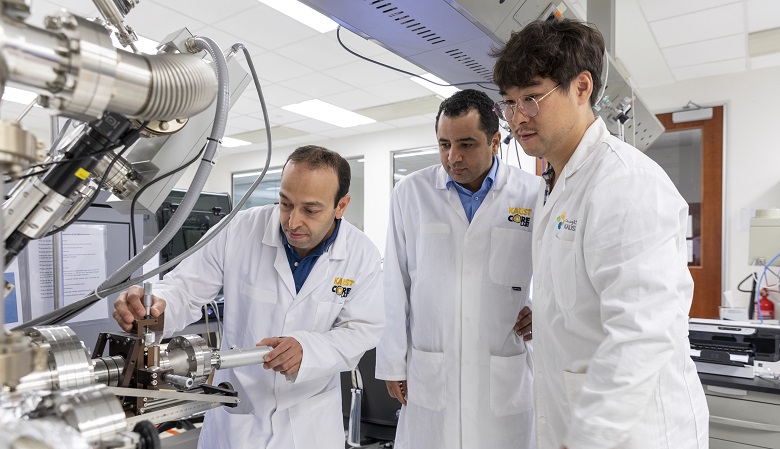 Nimer Wehbe (left) and Mohamed Nejib Hedhili (center), scientists from the Imaging and Characterization Core Lab, worked with KAUST researchers to characterize and confirm the architecture of a new optoelectronic device. Photo by Helmy Alsagaff.

The new semiconductor MQW structure is used for manufacturing cheaper, high-performance optoelectronic devices, with the results discussed in a Nano Letters paper. IAC’s Surface Science Lab team members utilized their expertise to characterize and confirm the proposed architecture of the new device.

Since the 1950s, silicon has primarily been used as a semiconductor material, but the nanoscale engineering of silicon through deposition processes to control its properties—for example, to produce solar cells—is time consuming and expensive. Because of these issues, scientists searched for alternative semiconductor materials.

Perovskites are an emerging family of semiconductors that are low-cost, promising and efficient energy materials used in optoelectronics and photonic devices in place of silicon. Unlike silicon, perovskite’s optical and electronic behaviors can be easily tuned using different compositions and simple deposition techniques.

The materials have the same crystallographic structure as calcium titanium oxide, the first perovskite crystal discovered, and perovskite compounds generally have the chemical formula ABX3.

“[Perovskites’] tremendous variety of structures, phases and dimensionalities makes [them] an excellent candidate for a broad array of applications, such as solar cells, photodetectors, light-emitting diodes (LEDs), and X-ray imaging (scintillators),” the researchers said in their paper.

To construct the MQW stacks, scientists often use epitaxial methods—for example, to deposit crystalline film onto a crystalline substrate—with gallium arsenide or gallium nitride through expensive processes. However, the KAUST research team realized a different method was needed to use the MQW structure in perovskite devices.

“[E]xisting MQWs have been mostly restricted to conventional semiconductor materials,” the researchers noted. “[These materials] demand time-consuming and capital-intensive processes such as metal-organic chemical vapor deposition and molecular-beam epitaxy…[The] requirements have inhibited the scope of MQWs to niche and high-end applications and prevented them from becoming a ubiquitous part of energy, lighting and sensing applications.”

“[P]erovskites offer immense potential for realizing MQWs that could overcome the limitations of conventionally fabricated semiconductor heterostructures,” they continued.

The research team created the artificial MQWs using a simple laboratory technique called thermal evaporation. Using powder of CsPbBr3 for the chosen perovskite well material and a barrier material (TPBi), the team found the powders evaporated when heated in a vacuum chamber. The vapor particles then traveled to glass, the substrate, where they formed a film. Alternating between heating the TPBi and the CsPbBr3 created the quantum wells. 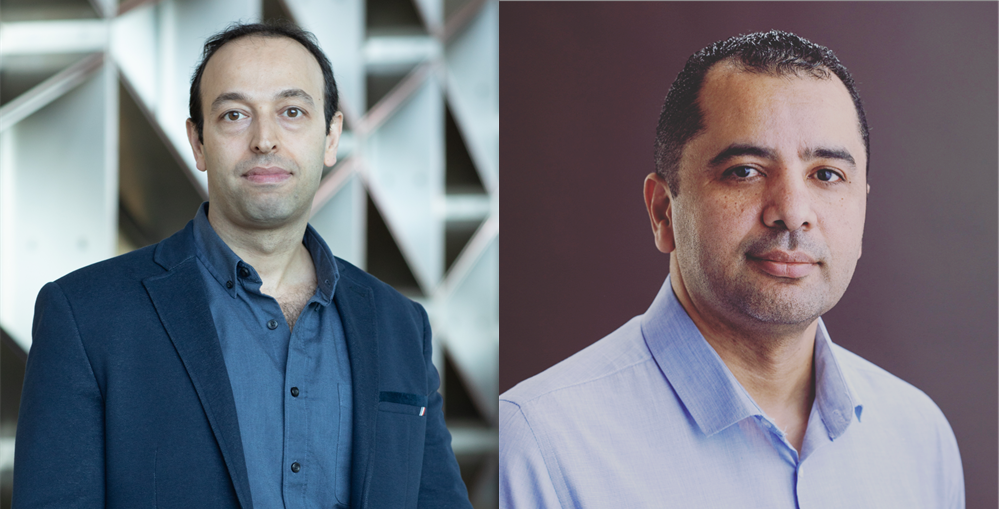 “Compared to the standard epitaxial methods for growing semiconductor films, the new method is cheaper since it can be performed using a simple thermal evaporator, an instrument available in most research labs,” stated the KAUST researchers from Bakr and Mohammed’s teams. “The evaporation method can also be used with any substrate. Moreover, the new approach leads to improved optical properties and energy conversion efficiency.”

“The first major step was to create and to characterize successfully a sample made of two semiconductor materials stacked in form of multilayers, where each layer should have a well-defined thickness,” explained Nimer Wehbe, IAC staff scientist, surface science, who took part in the work.

The sample fabrication step—upon which the success of the developed approach was based—was characterized and studied by Wehbe and Mohamed Nejib Hedhili, IAC team lead, surface science. By employing the resources available in IAC’s Surface Science Lab, they assisted the researchers with analyzing the MQW structure.

“Using a secondary ion mass spectrometry technique, or SIMS, we were able to provide an elemental 3D mapping confirming that the required architecture of perovskite-based artificial MQWs was successful,” Wehbe said. 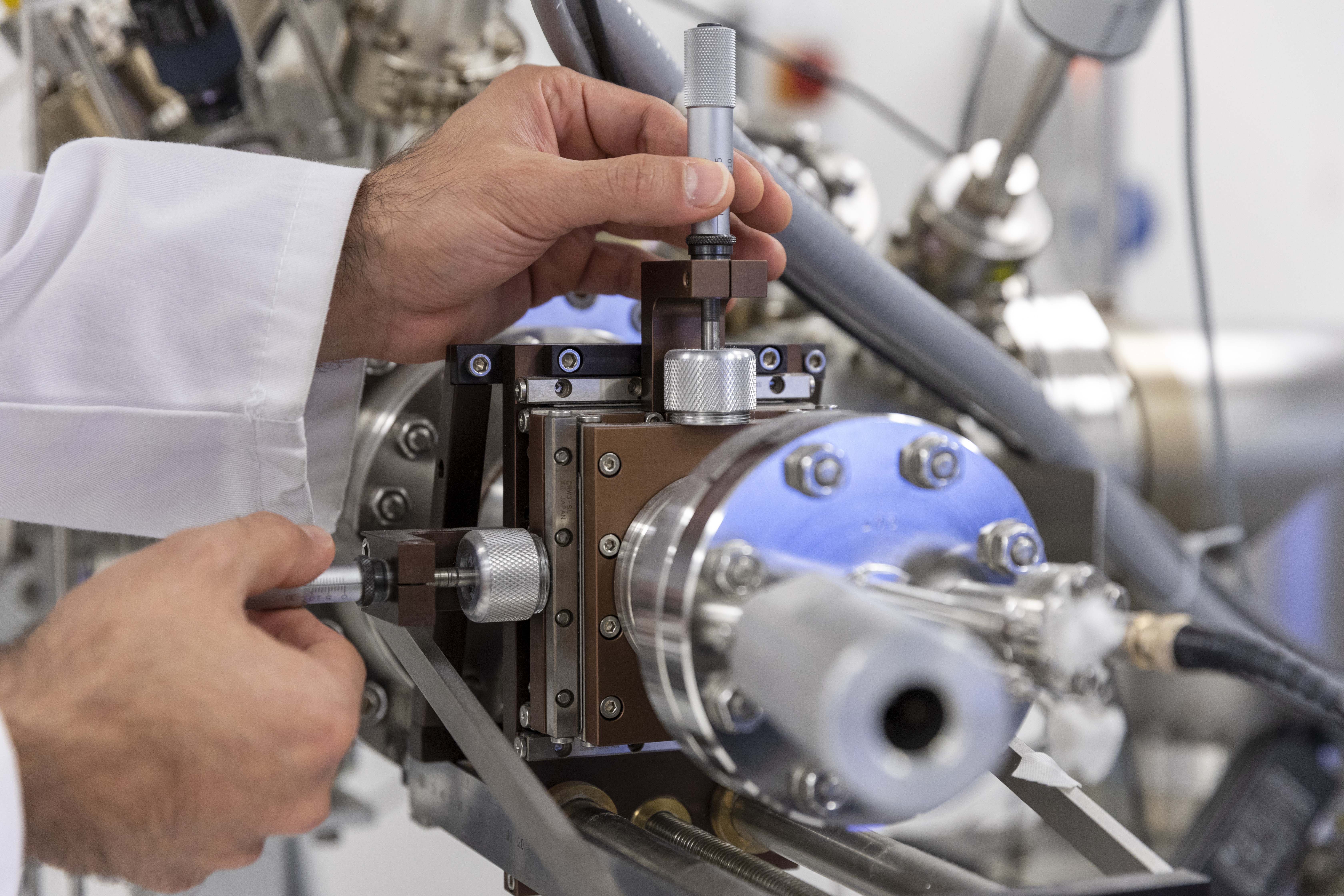 Imaging and Characterization Core Lab scientists made use of the secondary ion mass spectrometry technique (pictured here) to assist the research team in analyzing and characterizing their new device’s structure. Photo by Helmy Alsagaff.

“The new perovskite-based artificial MQWs pave the way toward widely available semiconductor heterostructures for light-conversion applications that are not restricted by periodicity or a narrow set of dimensions,” the research team noted in their paper.

“Our IAC staff scientists are working very hard to provide the KAUST research community with first-class technical expertise to match the cutting-edge instrumentation in the lab,” said Kun Li, acting facilities director overseeing IAC. “In the research work published in Nano Letters, our scientists not only provided the 3D elemental distribution information to confirm the quantum well structure, but they also shed light on its band alignment, which would not have been possible without solid theoretical background in the field.”